Don’t Waste Your Money- It’s Probably Not That “Ethical” Anyway.

Warning: this post is hardly journalistic, contains many quotation marks (which are not meant to be as sarcastic as they may seem, given the context), and may seem more direct and feather-ruffling than is entirely necessary.

What can I say? I sort of pulled an Alexander Hamilton and wanted to “fight, not write”. The ethical fashion space felt too crowded with white-blonde-girl voices, too catty and competitive. I checked out. But after two and a half years of being totally immersed in the lives of garment workers in Southeast Asia, two and a half years of pouring blood, sweat, and tears (All three are meant literally) into collaborating with Filipina garment workers to build a business that gives more power and better profit to them… I’m back. And no more nice-blogger Hannah. I haven’t got much time these days to write and I’m not going to mince words or warm up to the tough stuff.

Remember back when I was an “ethical influencer” and tried to convince you to buy $200 jersey sundresses and $50 tee shirts that were “ethically made”?

I’m back to tell you that at least 80% of the time you should probably not waste your money- that garment is probably not all that ethical anyway. The longer I am in this sustainable fashion world, the more I become convinced of three things:

1. Words are meaningless. Don’t believe a company when they tell you that they are “ethical”, “fair wage”, “sustainable”, etc unless they can tell you what they mean by that and back it up.

2. Not all conventional factories are big, bad, and evil. Take Saitex or Pactics, for example. Many of them, even if they’re not paying a living wage, are providing more decent work than some fair trade cooperatives.

3. See above. Not all small artisan or “fair trade” businesses actually are, despite how many smiling women they have in their marketing photos. You might remember a post that I wrote about a fair trade certified brand that I visited that was not even paying their workers the government minimum wage.

4. See above. Certifications are good, but they don’t guarantee good ethics.

So, like I said, I’m back. Either jaded as hell or a lot wiser and less susceptible to cause-based marketing, greenwashing, and fair-wage-washing. You decide!

To dig deeper into why I’m making this outlandish statement, Let’s look at a few specific examples of companies that I have a bit of beef with:

Take Everlane. The brand that claims to exhibit “radical transparency”, the darling of so many “ethical influencers” (Everlane give pretty great rewards to bloggers who promote them, not that that has anything to do with anything… or does it?) .

On to the beef. Everlane has these lovely, transparent pricing graphics on their website below, which seem really great. It’s easy to look at a nice slick marketing visual and feel that warm do-gooder sensation about your impending purchase. Almost $8 for labor? That seems like a really fair price to pay a sewer for a shirt! It can’t be that hard to zip together a simple garment like a button down, and the cost of living in China is way lower than it is in the USA.

But look closer, think deeper: $8 isn’t the portion of the cost of the garment that’s getting paid to the person who sewed it. It’s the cost paid to the factory. The factory that still has to pay their owner/CEO and all their high-level staff, keep a massive building operational, buy new equipment and fix broken machines, and the umpteen other giant expenses that come with running a garment factory with that money. How much of that $8 actually trickles down to the laborers? How much of that $60 you’re paying actually goes into “providing fair wages”? Are those wages even fair?

Everlane has very few (if any) marketing pieces surrounding their standards for what laborers are to be paid in order for them to partner with one of the many factories around the world they produce with. Instead of even the simplest of statements outlining what a living wage means to them as a company and guidelines for how they ensure that living wage is met in each area of the world they work in, they’re strangely silent. Their “radically transparent” factory information posts focus far more strongly on “state of the art equipment”, “health initiatives”, “education programs”, etc (newsflash: I’ve been to several conventional garment factories that pay a poverty wage but have great safety programs, health classes -obviously your production will be more efficient if your workers aren’t sick as much, duh).

Their “traditional retail” price makes it seam like you’re getting a really great deal… but really, how many of us shop in stores with $115 button downs? I’d venture to guess most of us would be choosing a $60 Everlane cotton button down over something more along the lines of a $35 one from Target. For most of us, it’s a hike in price, not a “savings”. And we pay it because we want to be ETHICAL. 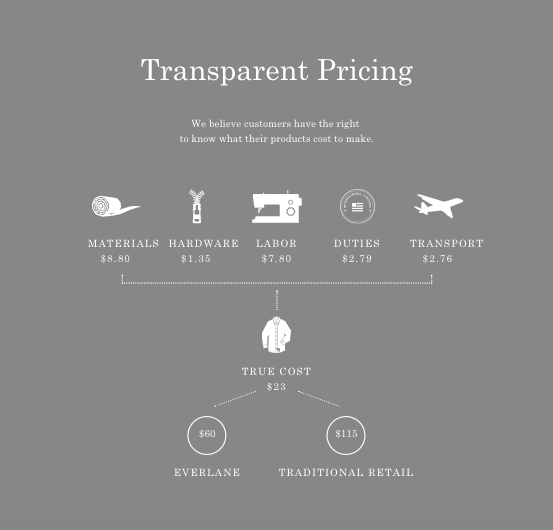 Here’s the thing: Everlane doesn’t own any of the factories where their products are made, and aren’t the only client of said factories. This begs the question- isn’t it possible that any random garment that you could pick up in Nordstrom or Target could be made in the same Chinese or Vietnamese factory as your almost-twice-as-expensive Everlane button down? There’s a reason that Everlane, even with

Am I saying that Everlane isn’t ethical? Well, not exactly- they certainly do offer up more information on their suppliers, which is nice, and use alot of natural materials, which is nice! But honestly- I can’t tell you to buy an Everlane shirt over a J Crew shirt on the basis of ethics.

Then there’s Reformation. The brand that claims “being naked is the #1 most sustainable option. We’re #2” and has been seen on not only all the most popular ethical bloggers but also Taylor Swift and Kendal Jenner. The brand that built their popularity on such sustainability stunts as creating their designs from deadstock fabric and taking guests on walk-through tours of their LA factory.

If you look a little closer, you’ll find that only 15% of the fabrics that Reformation uses are actually deadstock. They say they “want to use 75% natural fibers” in their production, but we don’t learn where the company is at in that goal… so for all we know they’re using 15% synthetic deadstock, 50% new synthetic fiber, and just 35% natural fibers. If that were the case, is that really “ethical” enough to justify the high markups?

I also have issues with Reformation’s labor practices. Reformation focuses on their own ethical factory in LA, but are less vocal about the fact that a) only 22% of their production takes place there and b) only 22% of their factory workers in their own factory make LA’s living wage. Instead, they write more about how they celebrate staff birthdays and what kind of eco-friendly pens they buy.

Am I saying that Reformation isn’t ethical? Again, not exactly- They do share alot more information than other, similar fashion brands, and produce a lot of items in the USA which generally means workers are paid at least US minimum wage… but that doesn’t change the fact that you pay well over $200 for a synthetic fabric dress that has very little information on where it was made and how the workers making it were treated. They’re taking you for a ride, yo- I buy synthetic deadstock fabric and I know that it’s cheap. Those markups are no joke.

Now, is this post permission for you to scrap all those pesky “ethical consumerism” ideals and go on a shopping spree at H&M? NO, definitely not. Just because alot of popular brands aren’t as ethical as they seem or the best place to spend your money.

The best option is always, well, don’t buy stuff. Or at least don’t buy as much stuff. Or buy stuff that’s used.

When you do buy stuff, really try to buy from companies that can actually give you specific answers to ethics-related questions. If you’re gonna spend big bucks, make sure that you know their promises are true. Companies that can really show you where your money is going, companies that will actually talk about wages. There aren’t that many out there and they’re pretty small, but they are worth the support. Otherwise, if all else fails, make that one well-thought-out purchase at Old Navy without guilt, I say- and just make sure that you take into account that item’s entire life cycle and how you’ll dispose of it when it reaches the end of it, plus commit to love and care for it as long as you possibly can.

I, myself, have adopted a “little-of-everything” approach. I bought $30 jeans from the mall (after failing to find a secondhand pair) instead of a $80 Everlane or $160 Reformation pair and used my money, instead, for healthy food and to help out a friend. I bought a pair of natural rubber boots from a small brand instead of a plastic pair that would have been WAY cheaper. I bought a bunch of very expensive actually ethical naturally dyed silk and cotton in Bangladesh to sew my own clothes, but bought a cheap pair of gas station sunglasses. I’m learning to find balance in the way that I choose to consume, balancing the good that my money can do outside of purchasing goods with a desire to still shop as ethically as possible.

I feel like it’s a good place, a healthy place. And I’ll probably never buy a $200 dress again unless I get a goddamn accountability report.

Hannah is an entrepreneur, writer, and activist with over a decade of advocacy work under her belt. She is especially active in the areas of anti-human-trafficking initiatives, fair wages, supply chain transparency, and labor rights. Hannah is a consultant for a variety of ethical enterprises around the globe, founder and CEO of brand new Filipino garment manufacturing startup TELAstory, and the founder of A Beautiful Refuge, a livelihood program creating job opportunities for women overcoming difficult circumstances in the Philippines.